The #1 New York Times best-selling author of the Percy Jackson series, Rick Riordan re-emerges yet again with his new novel, Magnus Chase and the Sword of Summer.

This gripping mystery novel explores the adventures of Magnus Chase, a daring but cautious young boy who lives on the streets of Boston following his mother’s death. This changes when Magnus is finally tracked down by the one man his mother warned him about—Uncle Randolph. Not long after, Magnus discovers a bizarre truth; that he is the son of a Norse God- a secret he is forced to keep.

“The Viking myths are true. The gods of Asgard are preparing for war. Trolls, giants and worse monsters are stirring for doomsday. To prevent Ragnarok, Magnus must search the Nine Worlds for a weapon that has been lost for thousands of years.”

Magnus is torn between saving himself or the lives of hundreds more when the fire giants throw an attack on the city.

MAGNUS CHASE AND THE SWORD OF SUMMER is a part of our new collection at Chapters! Click below to browse more books by Rick Riordan.

Diary of a Wimpy Kid: Old School is a children’s comic novel and is the tenth book of the Wimpy Kid Series written by Jeff Kinney. Greg Heffley, the book’s main character finds himself in a town that voluntarily chooses to stay away from electronics and modern technology. Greg becomes cynical towards this new trend that seems to be going around town. In the meantime, he begins to question if life truly is better without all these gadgets and gizmos. Will Greg learn to adapt to the ‘old school’ routine or is it just too hard for a little kid like him?

Find out with the latest Wimpy Kid book, available now at Chapters Bookstore! Jeff Kinney demonstrates a brilliantly comic narrative weaved with a compilation of creative doodles and an exclusive bonus of Wimpy Kid stickers on the last page. 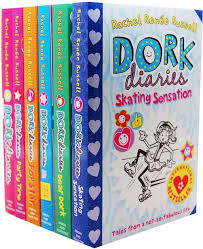 The Dork Diaries is a comic children’s series written by Rachel Renee Russell, suitable for children and pre-teens alike. The books are narrated by the novel’s main figure, a fourteen year old girl named Nikki Maxwell. Dork Diaries belongs to realistic fiction and was first published by Aladdin Paperbacks in June 2009. The tenth book of the series was released recently in October 2015.

The series revolves around the drama and happenings in Nikki’s life and includes an exclusive collection of comic strips, artsy doodles and drawings that bring every page to life. Some of the books also have space for the readers to write and draw on, together with Nikki’s helpful writing prompts.

“I’m so glad this series will be continuing for at least another couple of books, and I’m convinced it should be as popular as the Diary of a Wimpy Kid series. Middle grade girls will love Nikki and her friends, and I’m looking forward to seeing what she gets herself into next. Love it!” -wondrousreads.com

This global best-seller is popular among the pre-teen age group and is certainly a thrilling read. 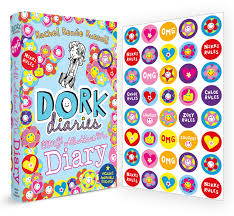 For more children’s books and best-sellers

From runaway romance to historical fiction, these heart-rending and compelling novels are a part of our best YA collection at CHAPTERS..

Eva and Jim are nineteen, and students at Cambridge, when their paths first cross in 1958. Jim is walking along a lane when a woman approaching him on a bicycle swerves to avoid a dog. What happens next will determine the rest of their lives. We follow three different versions of their future – together, and apart – as their love story takes on different incarnations and twists and turns to the conclusion in the present day.

The Versions of Us is an outstanding debut novel about the choices we make and the different paths that our lives might follow. What if one small decision could change the rest of your life?

Jacqueline Woodson, one of today’s finest writers, tells the moving story of her childhood in mesmerizing verse.
Raised in South Carolina and New York, Woodson always felt halfway home in each place. In vivid poems, she shares what it was like to grow up as an African American in the 1960s and 1970s, living with the remnants of Jim Crow and her growing awareness of the Civil Rights movement. Touching and powerful, each poem is both accessible and emotionally charged, each line a glimpse into a child’s soul as she searches for her place in the world. Woodson’s eloquent poetry also reflects the joy of finding her voice through writing stories, despite the fact that she struggled with reading as a child. Her love of stories inspired her and stayed with her, creating the first sparks of the gifted writer she was to become.

When Margo Roth Spiegelman beckons Quentin Jacobsen in the middle of the night—dressed like a ninja and plotting an ingenious campaign of revenge—he follows her. Margo’s always planned extravagantly, and, until now, she’s always planned solo. After a lifetime of loving Margo from afar, things are finally looking up for Q . . . until day breaks and she has vanished. Always an enigma, Margo has now become a mystery. But there are clues. And they’re for Q.
Printz Medalist John Green returns with the trademark brilliant wit and heart-stopping emotional honesty that have inspired a new generation of readers.

“Normandy Pale has grown up in the shadow of her bright, artistically talented, and temperamental older sister, who as a young teen began publishing a popular graphic novel series. Disconcertingly, “The Diana Chronicles” features warped, exaggerated, but identifiable versions of her family members. Normandy and her hapless parents were greatly relieved when Keira went away to college, but now she’s suddenly back, more volatile than ever, and not talking about her experiences or her latest book contract. Normandy is a junior at the Green Pastures Academy of Art and Applied Design, her sister’s alma mater. As she and her two close friends reach out in the spirit of friendship and anti-gossip to their peers they learn more than they bargained for in the search for truth and justice. Normandy tells this story, and the more surreal and personal one unraveling at home, as a “narrative nonfiction” project, complete with footnotes, illustrations, and asides to her creative writing teacher. The narrative/book is smart, darkly funny, sad, and heartening as Normandy learns some hard truths, how to stand up for herself, and how to take charge of her own destiny. While there is no reconciliation in sight, there’s no doubt that the truth has set her free. A surprising, witty, and compulsive read.”—Luann Toth, School Library Journal

5. THE BOY WHO HARNESSED THE WIND by William Kamkwamba

Malawi is a country battling AIDS, drought and famine, and in 2002, a season of floods, followed by the most severe famine in fifty years, brought it to its knees. Like the majority of the population, William’s family was farmers. They were totally reliant of the maize crop. By the end of 2001, after many lean and difficult years, there was no more crop. They were running out of food – had nothing to sell – and had months until they would be able to harvest their crop again.

He picked up a book about energy, with a picture of a wind turbine on the front cover. Fascinated by science and electricity, but knowing little more about the technology, William decided to build his own. Ridiculed by those around him, and exhausted from his work in the fields every day, and using nothing more than bits of scrap metal, old bicycle parts and wood from the blue gum tree, he slowly built his very own windmill.
This windmill has changed the world in which William and his family live. Only 2 per cent of Malawi has electricity; William’s windmill now powers the lightbulbs and radio for his compound. He has since built more windmills for his school and his village.

When news of William’s invention spread, people from across the globe offered to help him. Soon he was re-enrolled in college and travelling to America to visit wind farms. This is his incredible story.

William’s dream is that other African’s will learn to help themselves – one windmill and one light bulb at a time – and that maybe one day they will be able to power their own computers, and use the internet, and see for themselves how his life has changed after picking up that book in the library.

The New York Times bestselling author hailed as “the UK’s answer to Tina Fey, Chelsea Handler, and Lena Dunham all rolled into one” (Marie Claire) makes her fiction debut with a hilarious yet deeply moving coming of age novel.

What do you do in your teenage years when you realize what your parents taught you wasn’t enough? You must go out and find books and poetry and pop songs and bad heroes—and build yourself.

But what happens when Johanna realizes she’s built Dolly with a fatal flaw? Is a box full of records, a wall full of posters, and a head full of paperbacks, enough to build a girl after all?

Imagine The Bell Jar written by Rizzo from Grease. How to Build a Girl is a funny, poignant, and heartbreakingly evocative story of self-discovery and invention, as only Caitlin Moran could tell it.

7.   ACROSS THE BARRICADES by Joan Lingard

Kevin and Sadie just want to be together, but it’s not that simple. Things are bad in Belfast. Soldiers walk the streets and the city is divided. No Catholic boy and Protestant girl can go out together – not without dangerous consequences . . .

Sometimes the truth lies closer than you think. The book is a compelling and heart-rending new novel from the Sunday Times Top Ten bestselling author of Behind Closed Doors. Jenna and Jack Moore have moved their family to Wales for a fresh start. For vivacious, happy-go-lucky fifteen-year-old Paige the future is full of promise.   But suddenly everything changes. Paige becomes more and more withdrawn. The closeness she once shared with her mother a distant memory.   It then becomes clear that Jack has secrets too. Preoccupied with her younger children, her husband’s fidelity and their fledgling publishing company, Jenna doesn’t realise the extent of her eldest daughter’s unhappiness until the unthinkable happens.

London 1972. Luke is dazzled by the city. It seems a world away from the provincial town he has fled along with his own troubled past, and his new life is unrecognisable – one of friendships forged in pubs, candlelit power cuts, and smoky late-night parties.

When Nina, a fragile and damaged actress, strays into his path, Luke is immediately drawn to her and the delicate balance of his new life is threatened. Unable to stay away from her, Luke is torn between loyalty, desire and his own painful past, until everything he values, even the promise of the future, is in danger…

The Bradleys see the world as a place where miracles are possible, and where nothing is more important than family. This is their story.

It is the story of Ian Bradley—husband, father, math teacher, and Mormon bishop—and his unshakeable belief that everything will turn out all right if he can only endure to the end, like the pioneers did. It is the story of his wife, Claire, her lonely wait for a sign from God, and her desperate need for life to pause while she comes to terms with tragedy.

And it is the story of their children: sixteen-year-old Zippy, experiencing the throes of first love; cynical fourteen-year-old Al, who would rather play soccer than read the Book of Mormon; and seven-year-old Jacob, whose faith is bigger than a mustard seed—probably bigger than a toffee candy, he thinks—and which he’s planning to use to mend his broken family with a miracle.

Intensely moving, unexpectedly funny, and deeply observed, A Song for Issy Bradley explores the outer reaches of doubt and faith, and of a family trying to figure out how to carry on when the innermost workings of their world have broken apart.